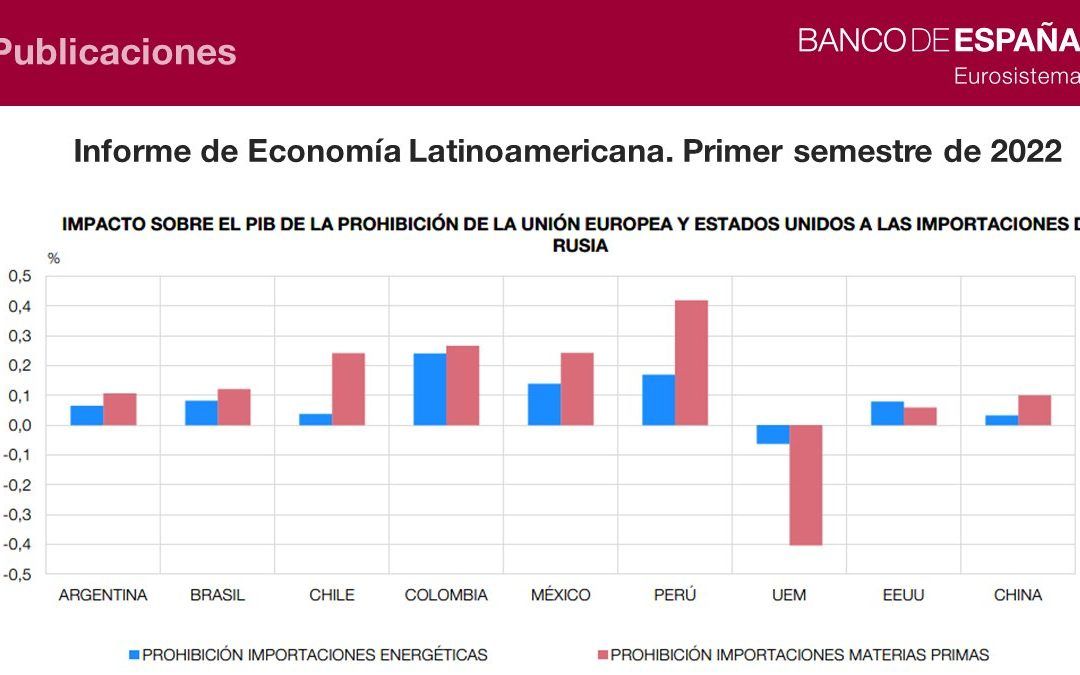 Presentation of the Bank of Spain’s Report on the Latin American Economy for the first half of 2022.

The main conditioning factors for economic developments are the development of the war in Ukraine, the slowdown in China and the intensification of inflationary pressures in the short term, which affect the conduct of monetary policies on a global scale.

The region has very little direct exposure to Russia and Ukraine, but even so, the dynamics of its economic activity may be affected indirectly through various channels.

In the short term, the impact of some of these channels on Latin America could even be positive: for example, if higher commodity prices favorably affect its terms of trade.

However, recent developments are contributing to reinforce the inflationary escalation, which has already been more intense in the region than globally. Although analysts’ forecasts continue to point to a gradual reduction in the current high inflation rates, the persistence of this higher-than-expected inflationary episode may end up generating significant indirect and second-round effects, especially in some Latin American economies with high levels of indexation.

The monetary policy of the main Latin American central banks has responded to the upturn in inflation faster and more intensely than in other emerging regions and previous normalization cycles, which would have helped to keep long-term inflation expectations anchored.

In any case, the intensification of the monetary policy normalization process in advanced economies, especially in the United States, could significantly condition the region’s macro-financial outlook. In particular, an unanticipated increase in official interest rates in the United States would have significant adverse effects on macro-financial conditions in Latin American countries.

Despite this uncertain environment, the region’s financial markets have maintained a relatively positive dynamic in recent months, while bank credit has recovered. Meanwhile, the main indicators available show that the situation of the banking sector remains solid.

The external vulnerabilities of Latin American economies are, in general, contained. On the other hand, there is a deterioration in vulnerability indicators related to public accounts, a situation that could continue in the absence of medium-term fiscal consolidation plans in a large majority of countries.

There is also a persistent risk of increased social and institutional instability, for example, as a result of the loss of purchasing power suffered by the most vulnerable households in recent quarters due to the upturn in inflation, which could weigh on the region’s growth prospects and hinder the implementation of major economic reforms.
economic reforms.

In any case, some important safety buffers remain in place, both internally and externally. At the national level, the level of private sector savings and the international reserves of Latin American central banks are, in general terms, close to their historical average. At the international level, the International Monetary Fund (IMF) and other multilateral or regional institutions maintain several instruments that are available to provide financial support to countries in the region in case of need.